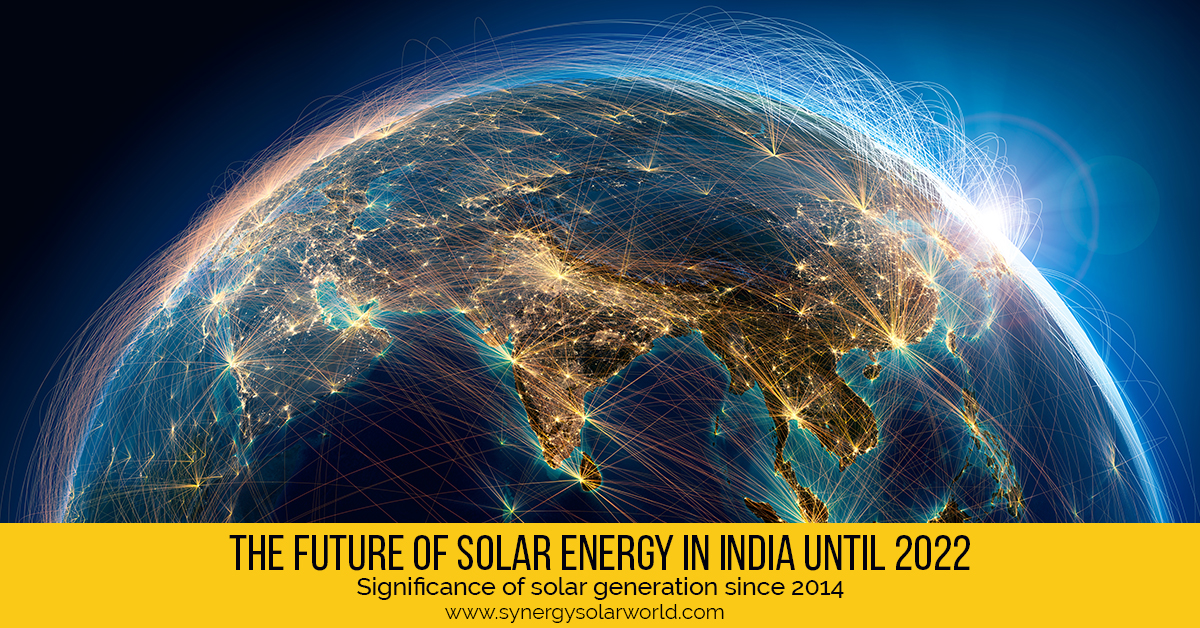 The Future of Solar Energy Systems in India until 2022:

“I’d put my money on the sun and solar energy. What a source of power! I hope we don’t have to wait till oil and coal run out before we tackle that. I wish I had more years left!”- Thomas A. Edison

The Union Government’s ambitious National Solar Mission of meeting 175 Gigawatts (GW) Renewable Energy(RE) capacity by 2022 would give a boost to the solar energy industry in India. Out of the total 175 GW of RE produced, 100 GW would be from solar power, remaining from hydro, rooftop and bio means.

India has an enormous potential of becoming the largest producer of solar energy in the world. The geographical location can owe to becoming one. India is near to the equator. The eastern states of India- Rajasthan, Andhra Pradesh, Gujarat, Madhya Pradesh, Punjab, Haryana, and Maharashtra, have a suitable tropical climate to harness the solar power to its full capacity.

There has been a significant improvement in solar-generation capacity from 2014 to 2018. It grew eight times from 2,650 MW on 26 May 2014 to over 20 GW as on 31 January 2018. India's solar installed capacity reached 26 GW as on 30 September 2018. It has been able to make a considerable difference in solar power capacity due to the financial support by multinational investment banks, initiatives by Govt. of India and state level progresses. State-level progress has happened in the large Indian states along with the eastern states of India. Karnataka topped all the solar state in the FY 2017-2018, with the installed capacity of 600 MW at “Pavagada Solar Park” and the 2,000 MW (2GW alone) solar project to get fixed by the end of the year 2020. After Karnataka, Telangana and Andhra Pradesh were the leading states that year.

Below is the list of Government initiatives that have helped in the scale-up of the solar capacity since 2014:

- The Union Cabinet approved raising funds through bonds issued by the Indian Renewable Energy Development Agency (IREDA) and Greenko for renewable energy projects. - Union Government’s decision to provide custom and excise duty benefits to the solar rooftop sectors also catalyzed the progress. - The Ministry of New and Renewable Energy (MNRE) has been implementing programmes such as National Biogas and Manure Management Programme (NBMMP), Biogas Power (Off-grid) Generation Programme (BPGP), and Waste to Energy Programme for setting up of Biogas Plants to fulfill the needs of people from remote areas.

Below is the list of financial support provided by International financial institutions:

- European Investment Bank (EIB) with YES bank financed a total loan amount of US$ 400 million for solar and wind projects in India. - EIB also extended a loan amount of US$214m to State Bank of India (SBI) for five grid-scale solar energy projects. These projects are due by 2020. - International financial institution World Bank approved US$ 100 million in the year 2017 for large-scale solar parks in India. - The World Bank also signed an agreement with the International Solar Alliance(ISA) to support India in its ambitious target. “India’s power system is among the largest in the world.”- remarked by World Bank

Alongside, there are economic factors if overlooked; the target might fall behind. As per the latest report by rating agency CRISIL, India still falls short by five times in achieving its goal of 100 GW solar power by 2022. It would be able to touch 78-80 GW solar power capacity against 20 GW (as on 31st Jan 2018), by fiscal 2023.

There has been an ongoing discussion on the imposition of safeguard duty on solar panels and modules. About 90% of the solar modules used in India get imported from China and Malaysia. So, 25% of safeguard duty imposition slowed down the overall project’s progress. It also impacted the outcome of bid price leading to cancellations of bidding tenders. Uttar Pradesh canceled an auction for 1000 MW solar project in July 2018 when the lowest bid came at 3.48/- per unit. Solar Energy Corp. of India (SECI) also canceled 950 MW of solar tenders due to the same reason. The solar power tariffs had gone down to 2.44/- per unit in 2017 which was threatening for domestic manufacturers of solar modules. So, Govt. decided on safeguard duty imposition. But this had led to cancellations of indispensable auctions. Later, Govt. lifted the safeguard duty which made the domestic manufacturers unhappy again.

According to Rahul Prithiani, director of CRISIL Research, Government should offer an incentive to help individual state project’s sustainability. It should also take each solar project bids more carefully and live with the bid price even if the tariffs are towards the higher side. Otherwise, the chances are India would miss upon the ambitious target of generating 100 GW solar power by 2022.

Synergy Wave System LLP is an authorized distributor of Waaree Solar Products. We are based in Gurgaon, Haryana, India. We deal in a range of Solar-based products and project consulting. Get in touch with us today for queries and quotation.